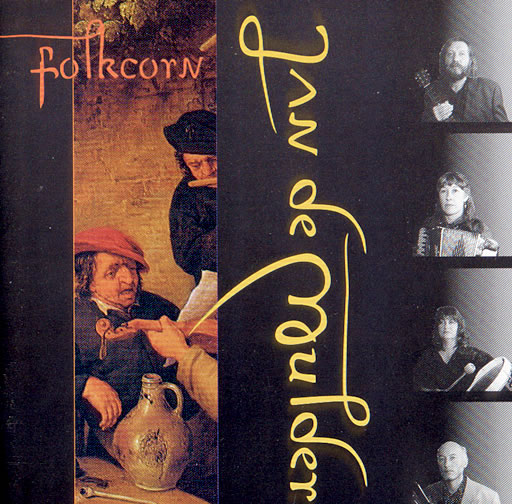 Here is the wine and there is the jug,
And there you have the drunken Jan
Wine and jug and drunken Jan
Meat and fish and Manneken Pis
And there's the bird that is deceitful.

Here is the dog and there is the cat
And there you've got the East-Indies rat
Dog and cat and East-Indies rat,
Sun and the moon and the crowing cockerel,
Wine and jug and drunken Jan
Meat and fish and Manneken Pis
And there's the bird that is deceitful

*Manneken Pis is a famous fountain in Brussels depicting a small boy urinating.

A young man in prison is looking back on his life, one day before he will be executed. His parents did not take good care of him so he wandered around at night and soon became a criminal, robbing people and raping women. One girl recognised him when he was eating and drinking in the city of Gent (Flanders) and so he was caught and brought to jail. When his mother came to buy him free he told her it was too late, he was to be executed the next day. She asked him if he did not feel ashamed and he answered that for a merchant's child to be without money was even more painful. The woman went home until she came at a waterfront and then "her young life didn't last long", in other words, she drowned herself.

My mother and father did not look after me.
They put me out on the street at night, which is why I went away,
and at the time had no evil intent.

What did I meet on the way? Three gentlemen so rich in goods.
I stole their goods and their money
And hid it under the ice.
They were three gentlemen from Paris.

Once I had had my will with this proud girl
I let her go again, let her go home.
She was a beautiful girl of eighteen.

"Well, mother", said he, "mother, it is time for you to move on.
The letters have arrived saying that I must die tomorrow,
mother, I have no further need of money."

The mother turned on her heels and went her own way,
a way that was so long until she came to the water,
her young life did not last long.

When they reached Burburg,
The market at Burburg,
They broke all their eggs
And the butter fell into the mud.

"Plompaart", she said, "Plompaart,
Go back home and get the rake
And we'll pull the butter back out
Before it sinks into the ground.

And it's not the butter that's the problem
But the butter muslin*.
I tore it yesterday evening
From Plompaart's best trousers."

"Have you used my best trousers
To make a butter cloth?
In all my born days
I have never known a more stupid wife."

* Muslin is a kind of finely woven cloth (cheesecloth) probably made from flax. It was (and sometimes still is) used to hold portions of butter and cheese.

Mother hangs the pot up over the fire,
The Giant is coming here.

Mother makes a sandwich
The Giant is cross

Mother draws the best beer
The Giant is greedy.

Mother very soon shuts the barrel,
The Giant is drunk.

Mother dishes out bread and cheese,
The Giant is dead.

Jump up and show your shoe

This is an invitation to dance. In the stanzas men and women of different ages are mentioned with their special abilities: old men are very good at smoking their pipes all day, old women stir their cooking pots, young servants drink their pints, young girls blow their cornets (trumpets) all day.

Jump up and show your shoes,
show us what the old men do.
The old men are sensible,
they sit and smoke their pipes the whole day through.

Jump up and show your shoes,
show us what the old women do.
The old women are sensible,
they stir their cooking pots the whole day through.

For sailors, life is hard: there are no women on board, the food is bad (baked beans with vinegar while the captain takes all the meat), when we're out on shore-leave they only serve terribly bitter beer, we are at the mercy of hurricanes. But when we sink and drown at last there is one big comfort: At the bottom of the ocean we can drink forever with Neptune .

THE SAILORS' WAGE
We sail for a seaman's wage
over the salty sea.
Even though women never go with us
over the salty briny sea, over the salty sea.
And whether we're in good mood or bad,
we are driven by the wind.
We eat beans in vinegar
The bacon is for the captain.
And we go drinking on shore,
where they serve beer as bitter as gall.
And then a hurricane comes along ,
to put an end to our sailing.
So then we call on Neptune:
"Neptune, don't let us drown"
And when we have died and passed into eternity,
we'll arrive in heaven.
And there we'll get our last wage
and drink along with Neptune.

A COOPER WENT OFF TO MAKE BARRELS

A cooper went off to make barrels
far into Germany.
He came to a tavern,
sing hey, sing hey
where he found barrels to be made.

Note: Like the miller, the cooper (maker of barrels) had the reputation in the past of being a womaniser. The man in this short song travels as far as Germany in order to make love…

Herring is so good

Herring goes very well with all kinds of drinks: beer and "pekelharing", a traditional Dutch gin.

Herring is so good, good, good,
to drink to from time to time.
So open up the barrels, barrel, barrel.
Let your glasses ring.
There, there you have something to drink,
drink freely, there's yet more in the barrel!
My friend, that applies to you, you, you,
like this - a good draught.
You want two?, well, well, well!
Each one drinks to his heart's content.
Three, three makes a cloverleaf,
drink freely, there's yet more in the barrels!
Its tail has to be on, on on (the fish),
that makes it easier to hold.
Salted herring, we, we, we,
make you swim merrily .
So, so, my friends, hurry up a little,
drink freely and leave no beer in the barrel!
The barrel is rattling, oh, oh oh,
the tap won't run.
Has the brewer more, more more?
Yes indeed, I would hope so!
We, we sing lustily:
"Our barrel of monks' beer is empty!"

With exquisite music
wine must be praised.
Let us try to respect its powers
day and night.

Melancholic pains
it drives away immediately.
It causes sighs to flee. Its fruits
are full of pleasures.
Where friendship is broken
it can stoke the fires of love again.
For the inner feelings of love
it can conquer.