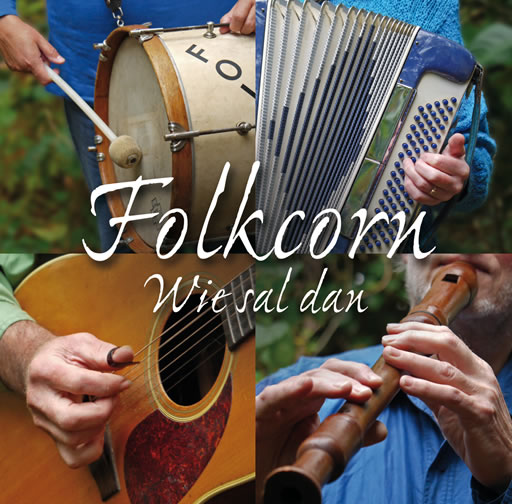 FOLKCORN - Early Dutch and Flemish folk music
Folkcorn, established in 1973, is one of the oldest Dutch bands playing traditional music. This music group from Wageningen in the Netherlands has long been busy unearthing treasure from the music and lyrics left to us by past musicians and composers. Folkcorn has discovered dance tunes and songs about love and war, eating and drinking, highwaymen and knights. The repertoire consists of popular historical music from the early Netherlands and contains songs to be listened to, such as ballads and unaccompanied madrigals, as also joyful and happy instrumental pieces including dance music.

The music was passed on from player to player, from generation to generation, from the Scottish sailor to the fisherman from Zeeland and from him to the Breton - or the other way round. This musical treasure has been collected together in many books.

With their music Folkcorn wish to contribute to keeping alive this treasure-house of songs which were threatened with being forgotten and are often not even recognised by many as being part of the Dutch and Flemish heritage.

The members of Folkcorn interpret the tunes and songs in their own inimitable way: some numbers sound authentic while others are played and sung with an unmistakeably modern flavour.

Instruments
Folk musicians are children of their time: they use whatever is available to make their music. Every age has its own instruments, each with its own possibilities. On this CD Folkcorn uses the steel-string folk guitar, accordion, recorders and drum as a reliable basis.

About the music on this CD

The instrumentals
The instrumental numbers (tracks 2, 4, 6, 7, 9, 11 (title tune), 13, 14, and 16) are taken from the collection Oude en Nieuwe Hollantse Boerenlieties en Contredansen - Old and New Dutch Country Songs and Dance Tunes [ONHBC]), published in separate parts between 1700 and 1716. The collection consists of approximately 1000 dance tunes, principally from the Dutch Golden Age and the early Netherlands - the 17th century. You can find the notation of these melodies at htttp://www.simonplantinga.nl/hbc.html. The arrangements are our own.

The songs
The songs are taken from various sources in the period from approximately 1500 to 1850, and deal with themes common at the time, such as love, drink and poverty. Track 1 is a song in praise of eating wild fowl, taken from a collection dated 1745. Track 3 is a ballad about three young men on the road to Antwerp. They rob a merchant, are arrested and tortured. This song can be found in early 17th-century collections but probably has its origins in older German sources. Track 5 is the farcical tale of a cooper who has his eye on his serving maid, but is tricked by his wife in collaboration with the maid. A version of this song can be found in a collection dated 1855. Track 8 is about a wastrel of a man and his wife who is angry with him. The message is: co-operate rather than fall out. The song was given Dutch lyrics in Antwerp in 1641, but the melody and the setting were brought to Antwerp approximately a century earlier by the Italian composer G.G. Gastoldi. Track 10 is a sad dialogue between a whaler and his love. He arrives home after a long trip only to find that she has another lover. She comforts him by saying that he will probably find someone else. The song is from the 17th century. Track 12 is about a man who calculates - out loud - that he cannot maintain his family on what he earns. It is an abbreviated version of an Amsterdam poem dating from the first half of the 19th century. We do not have a melody for this one, so we put it to the dance tune of Exters ende Kraijen with a slight adjustment (ONHBC 143). Track 15 is about a writer who asks a girl in the winter if she will warm him because his house is falling down - a metaphor for his body. He offers her a golden headband but she rejects him. It is our own translation and editing of a German song by Caspar Othmayer (1515-1553) from the collection Gesellige Zeit (Happy Times). This fits in well with the tradition of agreement in themes and melodies in the former Dutch and German territories. Track 17 is a song of praise for the drinking of wine in good company - and a warning not to over-indulge. The source goes far back to an Amsterdam collection dated 1583. Track 18 is about an adventurer who earns his living playing dice in the pub. Sometimes he has no money for food or drink but still he opts for this carefree lifestyle. We have translated into modern language the ancient and difficult Dutch of the original lyrics of Waer sal ic mi henen keren (Antwerps Liedboek, The Antwerp Song Book, 1544). The oldest version probably originated in Germany in the 15th century.

All the numbers were recorded live. On track 7 the bass guitar and guitar were dubbed in later as were the spoons on track 13.